The office has been founded in 1909 by André Portier as a part of the society "Henri Portier and Co." specialized in silk importation from East Asia since the 19th century. Henry, his father, was a collector of all kind of works of art. A part of his collection was sold at the Hôtel Drouot on 21-22-23 of January 1902. André Portier was the expert of famous collections like Haviland, Gonse, Corbin, Migeon, Vever, Vignier, Manzi, Vitta and others. He was not only specialized in East Asian Art, but also African, Oceanic and Pre-Columbian Art. He worked mostly with the auction-houses such as Lair-Dubreuil, Baudoin, Flagel, Etienne Ader and others.. 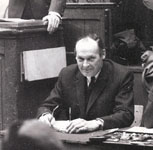 In 1942, Guy Portier, head of the silk department until that time, takes the place of his father, imprisoned during the War. André Portier passes away in 1963. The office gets more focalized in East Asian Art. Japanese Prints have passionated Guy Portier during years, he was, with his son Thierry, the expert of different important sales, such as the Levéel Collection of Japanese Prints sold in 1979 and 1980 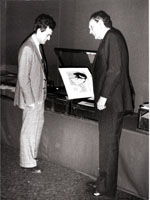 When Thierry Portier joins the office in 1973, Japanese art market expands. Among other collections, he organizes the Corbin, Lichtenberger, and Rouvière sales. He also dedicated himself to the spreading of Dr Maurin's and Hussein Pacha's collections of chinese objects as well as the chinese lacquer and ceramic collection of Mr. & Mrs. Robert de Strycker. Korea is also honored with the sale of the collection of Mr. and Mrs. Mallet, former French ambassador to Korea. Guy Porter disappears in 2005.
Thierry Portier is a Honorary Expert at the Court of Appeal of Paris, and a member of French Syndicate of Professional Experts on Works of Art and Collections (SFEP).

Alice Jossaume, sinologist, integrates the firm in 2004 and became an associate in 2013. Passionated by chinese works of art, and Ming and Qing porcelain, she also specializes in Japanese prints.
She is an expert at the Court of Appeal of Paris, and a member of French Syndicate of Professional Experts on Works of Art and Collections (SFEP).